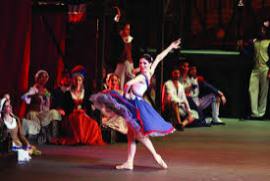 The events at Fathom, IN Experience and Path show a special production of the Bolshoi Ballets Le Corsaire, directly from Moscow, Russia, to choose the theater on Sunday October 22. Inspired by the epic of Lord Byron and rewritten by Alexej Ratmansky of the 19th century exotic classic Petipa, this miracle of repertoire is one of the most open productions of Bolshoi. Complete with a magnificent astonishment of the destruction of the boat and the dramatic scenes, this great romance has allowed quite a dance for almostAnything and done especially for those looking for miracles in the theater.